My friend and Bank Whistleblowers United co-founder and colleague William K. Black (Bill) author of The Best Way to Rob a Bank is to Own One, recently wrote an article talking about the “ideal director traits,” a summary of which had been published in the Wall Street Journal. The ”desired director traits” are based on a survey of 369 supervisory directors from 12 countries by the search and advisory firm Russell Reynolds Associates. The supervisory directors were asked which behaviors they thought were most important to creating a board culture that drives effectiveness and company performance. 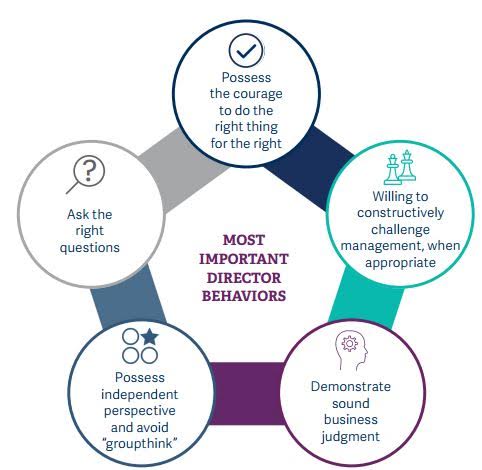 It listed as the top five most valued traits:

All excellent traits to be sure, however, my friend Bill takes issue with these, as such. He makes the case that CEOs do not think these qualities ideal nor do they value them. Instead, these are traits that they most fear in a director as evidenced by whom they attract as a director. And he notes that Warren Buffet and Charlie Munger, Vice Chairman of Berkshire Hathaway and Warren Buffet’s right-hand man, obviously agree with him.

Bill quotes Buffet as saying “the typical corporation has a compensation committee… they don’t ask Dobermans to be on it, rather they want Chihuahuas who’ve been sedated.”  He goes on to say that while the CEO cares, to the Board, it’s all “just play money.”

Bill challenges CEOs to improve the integrity and effectiveness of their companies by inviting individuals to their boards who actually own these traits — Whistleblowers!! For Bill, “whistleblowers exemplify each of the five most useful traits.” He points out (and I am honored) that two of the co-founders of Bank Whistleblowers United, Michael Winston and me, “should be the most heavily recruited people in the world to become board members at Fortune 50  firms.” And we would, in fact, be if those so called five most valued traits were what CEOs actually wanted in a director.

Thank you, Bill, I’m flattered. However no one is knocking on my door to recruit me and I’m sure it’s the same for Michael. You may recall Michael Winston’s experience as a C-suite level officer at Countrywide who blew the whistle on their loan underwriting fraud to the controlling managers, including the CEO. He warned, over and over that their lending practices would cause catastrophic losses. And they did. Michael’s career was destroyed by Countrywide’s (and then, Bank of America’s) management.

You certainly know my story by now, and my blowing the whistle on Citigroup for selling billions in mortgages annually through fraudulent “reps and warranties.” While I repeatedly warned of this fraud and potential liability, my warnings were ignored. The fraud escalated to 80% and I too lost my job!

Bill compliments us by saying we certainly exemplified courage, knowing our actions would cost us dearly and ruin our careers. He says we challenged management constructively, asked the right questions and acted on that information. It certainly was a “toxic group think” mentality which led to the fraudulent business practices that prevailed at both companies, Citigroup and Countrywide. In the face of it, we certainly maintained ”an independent perspective.”

Bill says, “in economics we are taught to focus on “revealed preferences,” what you actually do, not what you say, reveals your true beliefs.” He points out that neither Michael nor I have been asked to serve on boards, and that there are ”hundreds of whistleblowers who have proven themselves to be off the charts on these five ideal traits” and they probably have not been asked to serve either.

He points out that Warren Buffet’s firm, Berkshire Hathaway, which is essentially in charge of both Wells Fargo and Moody’s, two financial firms which have had their share of financial scandals, have not had a single director (as far as we know) step up to the plate. Perhaps the traits are too ideal as it seems firms don’t ask directors who exhibit them to come aboard.

However, his premise is sound. It would appear that many companies, especially those in financial services, are not hiring directors who demonstrate the qualities most desired in a director. They are hiring rubber stamps who don’t speak up and hold the company accountable — which is part of their responsibility.

According to Dennis McCuistion, Director of the Institute for Excellence in Corporate Governance at the University of Texas at Dallas, a member and lecturer for the National Association of Corporate Directors (NACD), directors are also responsible for good governance as well as having industry knowledge, both of which would alert them to issues and prevent hiding behind ignorance as an excuse.

A Harvard Business Review article, published in 2002, is still on target today. The author Jeffrey A. Sonnenfeld asks, “In the wake of the meltdowns of such once great companies as Adelphia, Enron, Tyco, and WorldCom, enormous attention has been focused on the companies’ boards. Were the directors asleep at the wheel? In cahoots with corrupt management teams? Simply incompetent? … In fact, the boards followed most of the accepted standards for board operations… In other words, they passed the tests that would normally be applied to ascertain whether a board of directors was likely to do a good job.”

His conclusion, “it’s time for some fundamentally new thinking about how corporate boards should operate and be evaluated.” Mr. Sonnenfeld, who served on and chaired commissions for the National Association of Corporate Directors states “what distinguishes exemplary boards is that they are robust, effective social systems,” with a virtuous cycle of respect, trust and candor.

Thank you, Bill, for the compliment and even more so for having the courage yourself to challenge more thinking and potential action on the need for sound corporate boards to stop the cycle of greed and fraud that is hurting this country.

First Time Televised… Smoking Gun Evidence on Full Measure!
A Case Study on Enron: How to Destroy a Company!
Ethics on your mind? Subscribe to my ezine to get my latest article delivered right to your inbox. Click Here to Subscribe