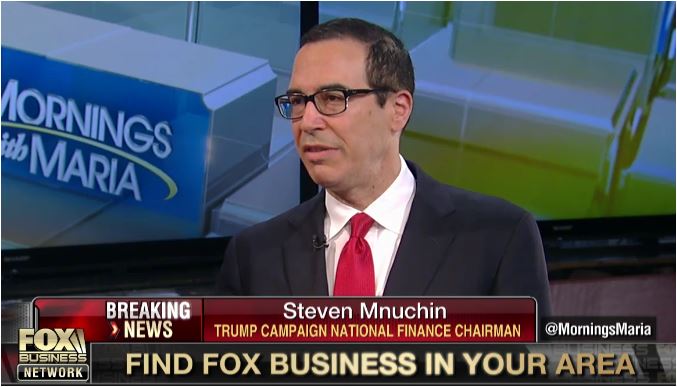 Wait — let’s take a closer look first.  I have several concerns to President-Elect Trump’s selection of Steven Mnuchin, his presidential campaign finance chair to the position of U.S. Treasury Secretary, a powerful position that admits him to the cabinet.

Some of the concern that Mr. Trump is turning to Wall Street is vehemently voiced by Sen. Tammy Baldwin (D-WI), who has consistently expressed dismay over the “revolving door” between industry and government, who  said it was more proof that in GOP-controlled Washington “Wall Street, big banks, hedge funds and the wealthy will be writing the rules to make a rigged system work for them.” Sen. Sherrod Brown (D-OH), the top Democrat on the Senate Banking Committee, said Mnuchin’s Wall Street ties “couldn’t run deeper.” “This isn’t draining the swamp — it’s stocking it with alligators,” he said.

The battles over the future of Fannie and Freddie have continued since the 2008 bailout, which cost $187.5 billion. During the 2008 financial crisis the government took over Fannie Mae and Freddie Mac leaving private shares of the companies outstanding. Their current bailout agreements require that they send nearly all of their profits to the Treasury, to date more than $250 billion, while winding down their capital to zero dollars by 2018.

In an interview on Fox Business, Mr. Mnuchin said that government ownership of the companies displaces private mortgage lending. “We will make sure that when they are restructured, they are absolutely safe and don’t get taken over again. But we’ve got to get them out of government control.” He has also said we “will get it done and get it done fast.” Fast — that is disturbing.

A strong concern of mine is rushing into too precipitous a plan to replace or privatize Fannie Mae and Freddie Mac without a better understanding of why they failed to begin with. In order to analyze the most effective way to return the entities to private ownership it is imperative to understand why they failed.

Congress has long debated replacing Fannie and Freddie, who were at ground zero of the 2008 crisis as federally chartered privately owned companies. They’d been given directives by Congress to make housing affordable, which pretty much meant: fulfill the American dream by having a chicken in every pot, a car in every driveway and a home for every American family – whether they could afford it or not.

As I have discussed in past columns, Fannie and Freddie were publicly owned but yet implicitly guaranteed by the US government, which enabled Fannie and Freddie to borrow cheaply and make significant profits for their shareholders. However, when they did experience significant losses the government bailed them out and they were put into conservatorship. They were then effectively made permanently captive and controlled by the government, with the government then taking all profits and effectively destroying the value of the equity owned by the private sector.

Mr. Mnuchin stating  that he wants to return the ownership of Fannie and Freddie to the private sector has caused the value of that ownership to soar, but has also raised questions about how he is going to do that without the private sector again believing that Fannie and Freddie are still guaranteed by the government and thus will be bailed out again if they get into trouble.

Many believe the reason they failed is that Congress kept insisting that Fannie and Freddie lower their underwriting standards in the name of affordable housing. And so the push was on to make housing affordable for everyone, regardless of their ability to pay. And thus many believe it was those borrowers with less credit standing and thus less repayment ability who defaulted and caused the significant losses going into the financial crisis.

I, however, strongly believe that one of the primary reasons Fannie and Freddie had such catastrophic losses was not that they had purchased mortgages with loose credit criteria at the behest of Congress, but that they purchased many, many mortgages which did not even meet that low bar of creditworthiness.

Although the mandated lower credit standards for many borrowers imposed by Congress certainly was a contributing factor, it is my strong belief, based upon my intimate experience in mortgage underwriting at Citigroup and the DOJ’s settlement statements about the mortgage operations at Citi and the other large banks that the reason Fannie and Freddie failed was the exact same reason that the large banks were taken to the brink of failure.

And that reason was greed on the part of executives, to maximize profits even though it involved continuing to purchase and securitize increasingly larger volumes of defective mortgages.

Fannie and Freddie purchased mortgages from banks without underwriting them, solely relying upon the representations and warranties by the selling banks that the mortgages met their policy guidelines, and along with the banks, were purchasing whatever mortgages the bank sold them and then securitizing those mortgages and guaranteeing the performance of those mortgages to the purchasers.

Therefore, in reality, a huge percentage of the mortgages purchased by Fannie and Freddie were of significantly worse quality than their already loose guidelines would supposedly permit, and it was the losses on those defective mortgages which ultimately caused Fannie and Freddie to be bailed out.

So before we leap, it is imperative we analyze the prior situation, be a bit cautious and structure change with long-term solutions. Or the cycle will start yet again.

Is Wall Street Taking Over Trump’s Cabinet? Will It Impact Accountability?
Fed's Kashkari Releases Plan to End "Too Big To Fail,” Compares Banks to Terrorists
Ethics on your mind? Subscribe to my ezine to get my latest article delivered right to your inbox. Click Here to Subscribe