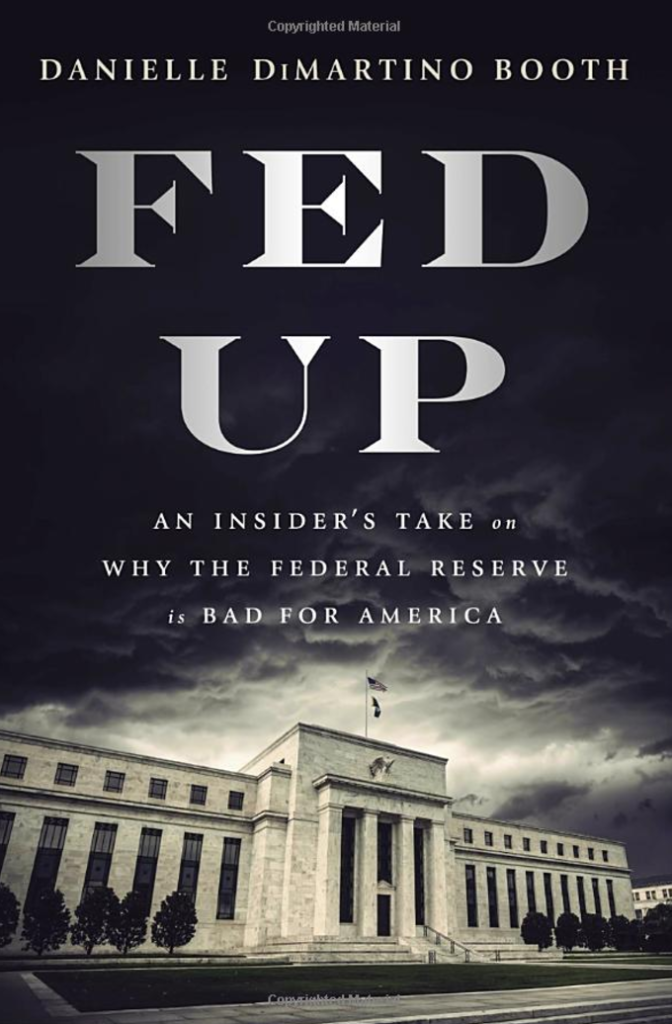 Danielle DiMartino Booth’s book FED Up is an insider’s take on why our Federal Reserve System is deeply flawed and requires major change. It is an interesting and disturbing read into the working of the Fed by one who’s been there and understands the system. I was deeply disturbed by some of her observations, most especially on her insightful comments on what cheap debt and debt overall have done to this country.

Ms. Booth held a high-ranking Wall Street position at one time and credits herself with correctly predicting the 2008 housing crisis. After leaving Wall Street for the Dallas Morning News, Ms. Booth reports that then Dallas Fed President Richard Fisher, seemingly wowed by her reporting, called to tell her “You should be writing for the Wall Street Journal. You could be a Jon Hilsenrath or Greg Ip.” She was subsequently recruited as an analyst at the Federal Reserve Bank of Dallas working closely with Mr. Fisher.

From her perspective, she found that the Federal Reserve System decision makers and analysts were “unelected academics who make decisions without the slightest understanding of the real world” convinced that their theoretical models were the answer.

She says she repeatedly pointed out the dangers inherent in Fed policy such as the deeply depressed interest rates. Ms. Booth notes that “In five thousand years of record keeping debt has never been cheaper.”… and “Since 2007 world debt has grown by about $60 trillion, enriching legions of investment bankers one bond at a time.”

The Fed has made it so cheap to borrow that companies, with their management driven by incentive compensation on increased stock prices, have driven a significant amount of debt-fueled common stock purchases to, for the short term, increase EPS and, therefore, stock price. This is simplistically called financial engineering based solely upon cheap debt.

She notes that companies in the S&P 500 expended more than $1.1 trillion to buy back their stock in 2014 and 2015. And this has driven down the investment in research and development and capital expenditures in recent years. It is R&D and capital expenditures which ultimately drives the growth of companies and thus employment, and that’s being curtailed by the temptation of cheap debt.

Stock repurchases do not accomplish anything productive and are for the short term, as contrasted with capital expenditures, which are typically made for increasing long-term productive assets and are thus expenditures, “investments” in the companies’ future. She further notes cheap debt is also driving much of the acquisition binge, which in turn leads to more employee layoffs.

Ms. Booth  quotes Rana Foroohar in May 15, 2016 Financial Times op-ed stating ”It is easier for chief executive officers with a shelf life of three years to try to please investors by jacking up short-term share prices than to invest in things that will grow a company over the long haul.” She notes that easy money kept those who already have the money and Wall Street alive and flourishing, while Main Street struggles.

And the very cheap debt has enabled our government to grow its deficits with little accountability, encouraging tax and spend policies. She noted, “the United States is paying less in interest than the average of the past half century. In 1995 the government shelled out $232 billion in net interest payments. In 2015 it had dropped to $223 billion,” despite the dramatic increase in government borrowings.

In another observation which we all knew, Danielle notes that the zero interest rates have destroyed peoples’  incentive to save and has destroyed pensions, with the huge unfunded amounts of public employee pension plans ultimately having to be dealt with, largely through increased taxes. She also notes that in Japan, where they have gone to negative rates, with  the population no longer having any incentive to save their money in banks, the sales of home safes have doubled in 2015. “Under ZIRP (zero interest rate program) only fools save for a rainy day.”

Ms. Booth also had some concerns which I share on Goldman Sachs’ infiltration of the Fed, noting that 4 out of the 5 District Bank Presidents eligible to vote in 2017 on the Federal Open Market Committee, which determines monetary policy, are alums of Goldman Sachs.

And she also makes note of the overall revolving door nature of the FED and correctly relates that to the weakened regulatory posture they have taken over the large banks they regulate.

There is no question Ms. Booth believes that the Fed is out of touch and relies on legions of PhD academics that rely on esoteric financial models unrelated to the real world economy. The Fed’s balance sheet has grown to $4.5 trillion and has so much control over this country’s economy that she refers to it as the “fourth branch of the US government.”

An interesting book, which has you turning the pages and yet a disturbing one. It prompts some critical thinking about the Federal Reserve, its present role, and whether or not it is hurting or helping the average American, while certainly enriching Wall Street and corporate management.

So, is the Fed out of touch and should we be FED UP? Read her book – as well as John Tamny of Forbes critique and make up your own mind. Let’s hear from you with your take on her work and ideas. She has certainly reinforced many of my feelings about the Fed.

Are Clawbacks and Shareholder Proposals Essential to Corporate Governance?
Why Is the Fed Ignoring What Goldman Sachs Is Up To Now?
Ethics on your mind? Subscribe to my ezine to get my latest article delivered right to your inbox. Click Here to Subscribe