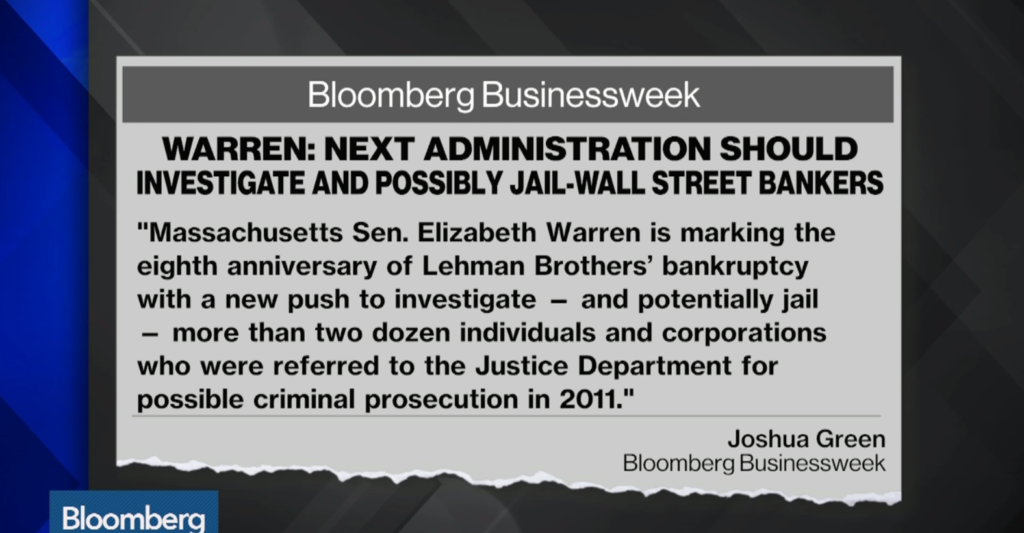 Senator Elizabeth Warren (D-MA), Member of the Senate Banking Committee and Ranking Minority Member of the Sub-Committee on Economic Policy, wrote two highly provocative letters this last week requesting a formal investigation into why President Obama’s administration has not brought criminal charges against the individuals and corporations involved in the 2007-2008 financial crisis.

According to Bloomberg, Senator Warren says that the Financial Crisis Inquiry Commission (FCIC) clearly believed there was enough evidence to prosecute them, and sent many criminal referrals to the Department of Justice, so she wants to open up investigations to better understand why that never happened.

“The Department has failed to hold the individuals and companies accountable,” she wrote. “This failure requires an explanation.” Her letter to FBI Director James Comey asked that he “release records of the FBI investigations into financial misdeeds in the wake of the crisis, to further illuminate why the Obama administration decided not to prosecute firms linked to the financial crisis.”

A three-page letter to FBI Director James Comey, and a twenty page one to DOJ Inspector General Michael Horowitz,  demanded an answer to why the Department of Justice (DOJ) has yet to prosecute any of the major players responsible for the 2008 financial crisis.

Applauding her demand for an investigation into why the referrals were not followed up, is Phil Angelides who had chaired the FCIC. “This is in the public interest,” he told Avi Asher-Shapiro of International Business Times. “We need to see if there was a fair investigation into what was happening on Wall Street.”

Her letter to Mr. Horowitz requested a review of how federal law enforcement managed to “whiff on all 11 substantive criminal referrals submitted by the Financial Crisis Inquiry Commission (FCIC), a panel set up to examine the causes of the 2008 meltdown.” Included in the letter is a description of each of the 11 criminal referrals, including the Citigroup criminal referral based solely on my testimony and evidence.

Senator Warren stated, “It has been almost a decade since the subprime mortgage market began to collapse and the individuals and corporations responsible for the resulting financial crisis have still not been held responsible. It is not too late to do so; and I urge your office to act quickly to open an investigation into the process by which the DOJ handled FCIC referrals of corporate and individual misbehavior that harmed millions of Americans.”

To date, the FCIC’s criminal referrals, which the Justice Department has had in hand since October 2010, have yet to be made public.  Senator Warren’s staff reviewed thousands of other documents released in March by the National Archives, my own testimony included; plus, hearings and testimony, witness interviews, internal deliberations, and memoranda, and found descriptions and records of them.

The FCIC was under a legal mandate, established by the Fraud Enforcement and Recovery Act which chartered the Commission, to refer to the Attorney General any evidence found where laws were broken and 11 different criminal referrals were sent to then Attorney General Eric Holder, all of which were ignored. This is overwhelming proof that the DOJ ignored all of this very substantial evidence of criminal wrongdoing, which the congressional commission felt warranted referral because of the compelling nature of the evidence.

Senator Warren wrote, “A review of these documents conducted by my staff has identified 11 separate FCIC referrals of individuals or corporations to DOJ in cases where the FCIC found ‘serious indications of violations[s]’ of federal securities or other laws. Nine individuals were implicated in these referrals (two were implicated twice). The DOJ has not filed any criminal prosecutions against any of the nine individuals. Not one of the nine has gone to prison or been convicted of a criminal offense. Not a single one has even been indicted or brought to trial. Only one individual was fined, in the amount of $100,000, and that was to settle a civil case brought by the SEC.”

By the way, an article in Wall Street on Parade says, “the two individuals Senator Warren refers to who were “implicated twice” in the FCIC’s criminal referrals are Robert Rubin, the former Treasury Secretary in the administration of Bill Clinton, who in the lead up to the crash of Citigroup in 2008 served as Executive Committee Chair of Citigroup’s Board of Directors. (After advocating for the repeal of the Glass-Steagall Act, which allowed Citigroup to own both an insured depository bank, an investment bank and brokerage firm, Rubin went straight from his post as Treasury Secretary to the Board of Citigroup, where he collected $126 million in compensation over the next decade.)

“The other individual whose name appears twice is Chuck Prince, Citigroup CEO during its implosion. A third Citigroup executive’s name appears as well on the list: Gary Crittenden, the Chief Financial Officer of Citigroup at the time of its crash.”

Both Rubin and Crittenden were explicitly warned by me, in writing, of the Citigroup pending huge losses one year before the bank bailouts.

Warren writes, “The DOJ’s failure to obtain any criminal convictions of any of the individuals or corporations named in the FCIC referrals suggests that the department has failed to hold the individuals and companies most responsible for the financial crisis and the Great Recession accountable. This failure requires an explanation.”

Eric Holder may feign frustration at the lack of prosecutions but the fact remains, Wall Street got slapped on the wrist and no one has gone directly to jail! Extracting settlements is not the same as holding the wrong doers accountable. The Department of Justice has not been as diligent as it promised to be. The evidence has certainly been there, as I can personally attest to.  Incredibly Holder has said, …“Do you actually think that if we could have brought these cases, we would not have?”

To date, not one Wall Street banker involved in the 2008 financial crisis has gone to prison; instead the big banks have grown larger at the expense of the American taxpayer and our community banks. The Justice Department and the Securities and Exchange Commission, in spite of their promises to hold the TBTF accountable, have failed miserably.

There has been no accountability; none! We need to stand behind Senator Warrens’ demand for an investigation.

Speaking Out Has a Price… Are You Willing to Pay the Cost?
There Aren’t Any Hallmark Cards for Whistleblowers… Yet!
Ethics on your mind? Subscribe to my ezine to get my latest article delivered right to your inbox. Click Here to Subscribe