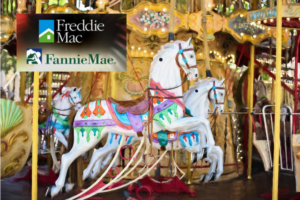 Fannie and Freddie remind me of that merry-go-round as once again they appear to be going down the same path that got us into the subprime credit crisis and financial debacle of ten years ago. Their negligence might just get us there again.

Most agree that the last financial crisis was caused by significantly reduced credit standards for mortgages, as banks and the GSE’s competed with each other for higher volumes of mortgages by continually reducing the credit requirements for various mortgage products. This was compounded by banks also providing fraudulent representations about the mortgage guidelines followed on loans which were subsequently sold to investors (including Fannie and Freddie).

As Tyler Durden, writing in ZeroHedge says, every man and woman’s unaffordable American dream of owning a house was bolstered just three years ago by Freddie Mac’s conventional mortgage that only required a 3% down payment for certain borrowers. While perhaps a modest sum, most Americans who needed access would be excluded due to minimum income requirements.

The program, which as described at the time was designed for qualified (that being the key word) low-and moderate-income borrowers – i.e., Millennials – saw limited progress over the last few years. FHFA Director Mel Watt told Congress just last year that Freddie’s 3% down program (along with a similar one from Fannie Mae) was continuing to grow.

Except it was not growing fast enough! The 3% down may not have been the problem but the modest income required to get that loan was. To fix this, Freddie Mac recently announced it was going to supercharge its 3% down program and roll out  a new conventional 3% down payment option for qualified first-time homebuyers, except  “there no longer will be any income restrictions.”

One of the issues involved is that while wages are growing annually at roughly 2.7% (according to the latest Case Shiller data) most metro areas in the US are experiencing home price growth of 5.4% or higher, double the average wage growth. The great American dream is increasingly unaffordable.

So what do we do about this? Of course, we bring back the subprime market since it worked so well ten to fifteen years ago! 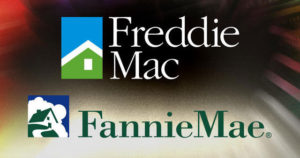 In fact, the subprime market is part of what led to the recession. So now we’re putting spin on it and calling it the “nonprime market.” We forgot that in reaction to the financial crisis, credit for mortgages was tightened dramatically, and between 2009 and 2015 tighter credit guidelines accounted for more than 6 million fewer, or “missing,” loans.

Consider that Fannie and Freddie were more than somewhat to blame for our 2008 financial debacle, our worst in a century. By allowing subprime mortgage home loans to borrowers who had sketchy credit and who put down minimal or no down payments, we opened the door to mortgage meltdowns. The question is why are we doing this again?

Fannie and Freddie may have gotten a rap on the knuckles but not enough it seems. They’re back. And big. And bold! With new standards that don’t even fit the definition of standard.

Fannie Mae had already relaxed its lending standards for prime loans and borrowers with higher debt raising the debt-to-income (DTI) limit from 45 percent to 50 percent and allowing for lower credit scores, smaller down payments and waiving the years’ worth of cash reserves.

The mortgage industry expected Fannie Mae would allow for the additional risk by demanding a higher necessary credit score, but that was not the case. When mortgage insurers didn’t buy it, as they would be the ones taking the risk, last month Fannie Mae “recalibrated” its risk assessment criteria yet again.

According to Doug Duncan, Fannie Mae’s chief economist, “We got a bigger response than we thought we were going to, so we dialed back to make sure we were in the right spot where our governance kicks in to make sure we’re not taking excessive risk.”

No surprise that demand from both borrowers and investors is exceeding expectations. And no surprise that the vultures are circling and once again the non-GSE’s are competing for their share of the spoils. Carrington Mortgage Services is one, a mid-sized lender; it is entering the game by offering loans to borrowers “with less-than-perfect credit.”

Rick Sharga, executive vice president of Carrington Mortgage Holdings says, “We believe there is actually a market today in the secondary market for people who want to buy nonprime loans that have been properly underwritten.”… however, “We’re not going back to the bad old days of NINJA lending, when people with no jobs, no income, and no assets were getting loans.” Carrington says it will manually underwrite each loan, assessing the individual risks. But it will allow its borrowers to have FICO credit scores as low as 500.

According to Sharga, it’s the big banks that are once again eager to get in the game. “It’s large financial institutions. A lot of people with private capital sitting on the sidelines, who are very interested in this market and believe that as long as the risks are managed well, and companies like ours are particularly good at managing credit risk, that it’s a good investment opportunity.”

Others like Angel Oak, with investors who are “a who’s who of Wall Street,” are jumping in. Angel Oak’s non-prime securitizations now total $1.3 billion in mortgage debt

“Rising home prices due to inventory shortages is making it tougher to save up for a down payment,” said Danny Gardner, Freddie Mac’s senior vice president of single-family affordable lending and access to credit. While Freddie Mac’s program, called HomeOne, doesn’t require income caps or geographic limits like previous 3% down programs, one of the borrowers on the loan must be a first-time homebuyer and it must be a one-unit primary residence.

“When I joined Freddie Mac three years, that was one of the issues everybody was concerned about, was whether or not millennials would be given the opportunity to purchase homes, and why were we not seeing the historical rates of homeownership for first-time homebuyers,” said Gardner. “Since that time we have seen the first-time homebuyer increase year over year over year and it’s not surprising.”

Ok, so we have several ways of looking at this. On a positive note, perhaps with due diligence and careful “risk taking” many Americans who could not qualify for a home mortgage will now be able to. Managed correctly, this is good for the economy. Homeownership brings a new sense of responsibility and care for the community.

Do I have concerns? Absolutely! The last credit debacle was caused in part by the freewheeling mortgage lending which fueled unparalleled greed and fraud. I have seen this before, as increased home prices led to loosened credit requirements which led to increased home prices … etc. This “new” path can put us back on the merry-go-round once again and lead us to another and greater financial recession.

Various articles on Fannie and Freddie

The Epic Story of Fannie and Freddie: Is there an end in sight?

Did We Learn Anything from the 2008 Crisis?

WLIW and WNET PBS Champion Playing By the Rules: Ethics At Work
The European Union Whistleblowing Legislation is a Game Changer
Ethics on your mind? Subscribe to my ezine to get my latest article delivered right to your inbox. Click Here to Subscribe